skip to main | skip to sidebar

One of his creations was Capitán Barbaloca, also known as Capitán Trinquete. Different names for one character and one objective: preventing from legal requirements from the publishers, which, as is well-known, wanted the creators to have no rights at all over their creations.

Well, as you see, I am beginning to spill over my speech... It doesn't matter. Just four things about Barbaloca. This was a pirate which a small crew of three or four men, one of them used to get colds. In the seventies, this character was named Trinquete, and severals strong cover albums were published under the publisher Toray. In the early eighties, Barbaloca appeared, as far as I know, in the renewed magazine Pulgarcito. I suspect it could have been published previously in the magazine Zipi y Zape because Pulgarcito was a sort of "re-fried" comic-book or a second edition of comic stories appeared on Zipi y Zape.

Also in the early eighties, Nabau was drawing, of course, in Zipi y Zape the comic stories of two boys: Tim y Tom. The scripts were signed by Jesús de Cos. I hope one day someone will explain me why J.Cos was a good and funny writer almost everytime, except when writing Mortadelo y Filemón comics.


Tim y Tom is the everyday life of tho children, one of them is bonde and fat as the another is thin and black-haired. This one has a sister. And sometimes it also appear the parents, which is a strictly huge difference with other series in those days such as Los Cinco Amiguetes (Jaume Rovira) or Anibal (Roja$ de la Cámara), in which the adult people or the parents are almost vanished for pages and pages. In this sense, maybe Tim y Tom is a series nearer of Zipi y Zape model (Escobar), or Roquita (Gosset).

Er... yes, of course... I know there is an Anibal's mother... and that exists a father for, at least, the two brothers of Los Cinco Amiguetes. But their rol is irrelevant In Anibal, the mother acts by not-appearing. She is never in the street where the son play.

However, Tim and Tom are two independent boys, as Anibal and Los Cinco Amiguetes. The parents play a rol, maybe bigger than in other series, but not such a relevant rol.

But, in the case I wanted to write about before wandering on other streets... in this case the father of Tim is important because of one single pannel.

But I amb magnanimous and I will let you wach the full story... and I avoid wasting more time changing the scanned image. 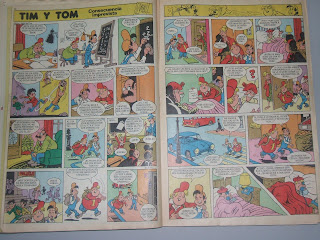 There is the v7p1 ... The "Camorra Espacial" pannel
(Zipi y Zape, #4, date: 19810302)
What is it about that image?. Well, I always wanted to know more about "Camorra Espacial". I thought, in my today's words, that it could have been an animation project for television. Or it could have been another comic series. It could be a parody of a Science-Fiction series... Star Trek? Or may Star Wars, because the films are form the last-seventies and this comic is from the very early eigthies... For instance, change "War" for "Camorra", and it works.

Several years later, a San Juan's hot evening, my father (only he could have done something like that) gave us a strange but attractive full collection: Inglés Junior. From Salvat and BBC.

Because of it I decided myself to write this entry in the language of Cervantes... Well, you know: Cervantes and Shakespeare was the same person, like Fikhino and Fizino. Gasp, I wrote nothing

On july 2008, after a whole life, I discovered this collection (I use this word with the help of a dictionary because, as everybody should know, the mistaken methods of teaching any language in this country say "learn grammar" which let, well, almost twenty English teachers the opportunity for no teaching vocabulary: this is deeply backed by Departament of Educació, Ministerio de Educación, Cambridge University and any publisher of English books, at least, until 2008), I repeat, I discovered this collections was from the seventies. I had a sort of strange reedition. Some years laters, maybe five, there were ads on TV about serial clusters or scrapbooks... [me gustaría saber si alguna palabra de las de antes coincide con "fascículos por entregas"y "coleccionables"]...

And there I discovered Nabau again. It's Barbaloca's cartoonist! Yes, look Mr Barrett... Well, maybe I should write again about Barbaloca and else.

And whatsmore I discovered "Camorra Espacial" characters again... at least, that one. I thought I had in my shelves the "Camorra Espacial" comic-books... It was another mistake... The main characters were two boys from the Moon, Castor and Pollux, in a series of rather boring stories. This wasn't the same kind of stories I had previously read from Nabau. Anyway, I enjoyed one of the best illustrators, one of those people who aren't tired of drawing whatever.

The one character I consider is the one fron "Camorra Espacial" appear in the last numbers, in which Barrett's circus travel to the Moon on a show tour. No ask who the Earth animals breathe on the Moon but they go there. 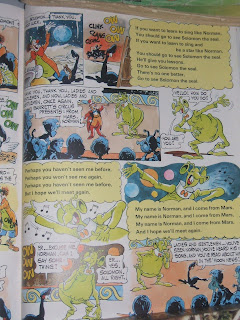 I didn't want to cut the image. Too much work for a day.
(Unit 102: The Best Singer on the Moon, page 9, on Inglés Junior volume 13)
The name of the "Camorra Espacial" is Norman. He is from Mars... and, well, maybe sometimes I will read his comic books elsewhere.